What Investors Don't Get about Google

Google fell sharply on Q1 earnings, mostly due to an ad revenue shortfall. We think investors are missing the bigger picture.

Alphabet's stock fell sharply on Q1 results, due primarily to ad revenue growing "only" +17% (vs. expectations of +19%).

How does Q1 impact the long-term thesis for Google's stock, and is the stock price undervaluing that thesis?

What Investors Are Missing: Slow and Steady is Better##

Here's what investors are thinking:

We disagree -- here's our take:

Putting aside Q1 results, Google is deliberately building its business slowly, bypassing revenue it could be making so it can drive more scale first.

It could be making much more money off of YouTube, for example, but is optimizing for viewership growth. Yet the market seems to be penalizing Google for the recent ad slowdown, plus bets that are costing money today but could pay off in the future.

Which brings us to valuation.

The Right Way to Value GOOG##

In 2017, one of our favorite investors, Bill Nygren who runs the successful Oakmark fund, did an analysis on what Google's true valuation was.

Today, GOOG's headline P/E ratio is 25x. It would be very easy to stop right there and say, yes, Alphabet is a great company but everyone knows it, hence it trades at a premium.

We think that take is wrong.

This headline P/E ratio is based on "GAAP earnings." GAAP earnings are a metric that makes life easier to compare stocks like Google, Coca-Cola, and McDonalds on an apples-to-apples basis. Or so people think.

The problem is, traditional GAAP accounting does not accurately reflect a modern software/services company like Alphabet. It misses a number of critical adjustments and unfairly penalizes Alphabet for the deliberate strategic decisions it's made to maximize long-term shareholder value. Not to mention its diverse businesses.

For example, advertising is an incredibly high margin business, while YouTube is likely closer to breakeven and Waymo is losing billions as it has no revenues currently. What's the right P/E ratio for GOOG when you lump all its complex businesses together? Most people don't do the math.

Here's a crack at the true valuation math for GOOG: 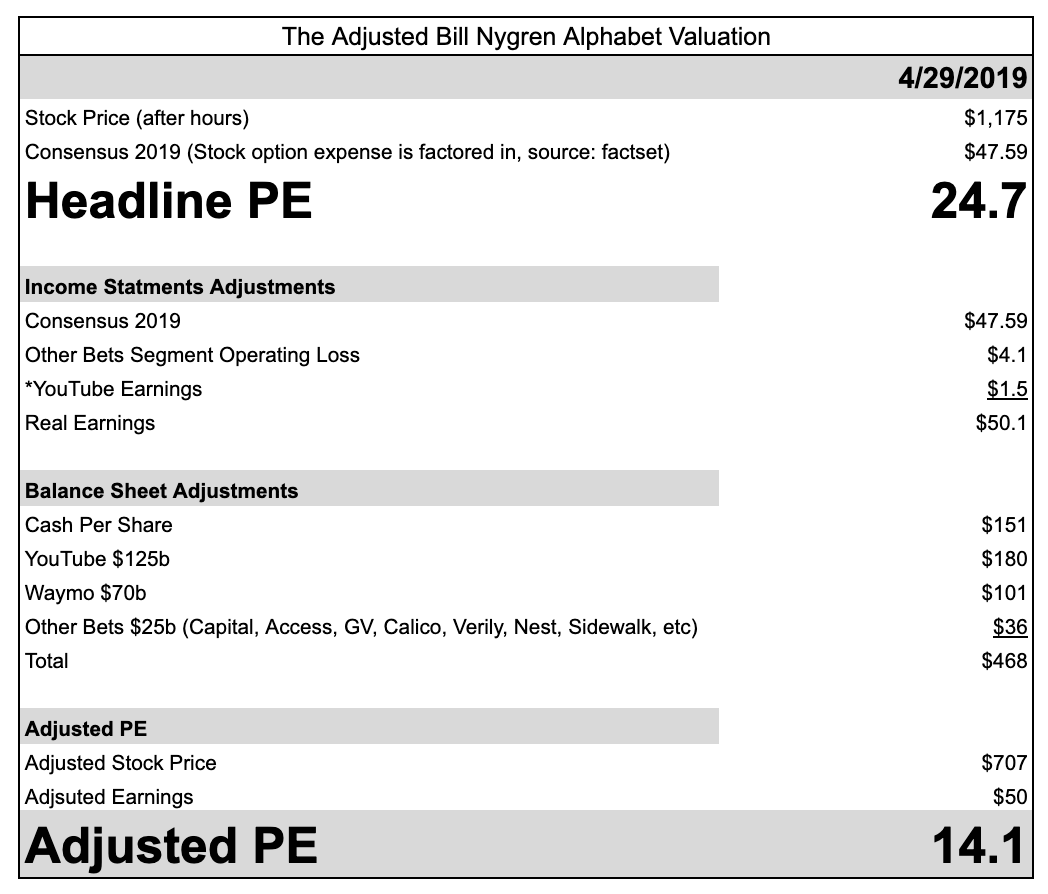 Thanks to our friends over at HardCore Value, a financial blog, who did this analysis to more accurately reflect the accounting for a modern company like Alphabet. They ascribe $125B value to YouTube and $70B value to Waymo (below the estimated $160B-220B and $75B-110B valuations from firms like Morgan Stanley and Evercore), plus some other adjustments.

Putting It All Together: GOOG Trades at ~14x P/E##

That makes GOOG -- one of (if not THE) best businesses in the world -- cheaper than the average U.S. company.

We'll leave you with one of Bill Nygren's famous remarks on Google:

"I've read a lot of arguments about the multiple the Google business deserves, but not once has it been below-market […until now]."