EDU: Holding through the upcoming catalyst

New Oriental Education and Technology Group, Inc. (EDU) is a leading consolidator in China's offline after-school tutoring (AST) market and a holding in Titan’s Offshore portfolio. EDU is well-positioned in a high-demand industry, taking share in a highly-fragmented market, and growing revenues and margins by capitalizing on their infrastructure and expertise.

However, over the past few weeks, growing speculation about potential government bans on weekend and holiday tutoring have caused EDU’s stock to decline 58% YTD through June 22nd.

While these rumors are a net negative for the stock, we believe the reaction has been overblown relative to the trustworthiness of the speculation. Put another way, we consider the stock’s reaction to be outsized compared to the impact rumors of this nature should have on forward probabilities and expected outcomes. We believe the stock now sits at levels we’d expect for an extreme downside case scenario: EDU’s price today reflects what we believe is a severe, low-probability event path, presumed by others as an inevitability.

Of course, it's impossible to predict what regulators will end up doing, and we always attempt to bake in a healthy margin of safety in our forward estimates. But we believe that the available evidence suggests that the severe outcome priced in today is far more likely to not materialize than materialize.

The more likely base case we've modeled contemplates a set of regulatory outcomes that effectively cuts EDU’s FY23e revenues by ~20%. Despite baking in a set of assumptions we would view as quite punitive / aggressive in nature, even that case would result in a valuation that is 23% above today’s levels.

As a result, we will be holding EDU until official news is released regarding the anticipated regulation, which we expect will happen sometime over the coming weeks. While there's of course no way of predicting the future, we believe the market is compensating shareholders extremely generously at these levels, based on our assessment of the events that led up to today and what they suggest about the forward event path.

We will be monitoring the upcoming developments carefully, and will be reviewing and updating our view immediately following the regulatory catalyst. More detail on our current thinking follows.

Stepping back: Why is the Chinese government focused on the education market?

As we’ve discussed in our prior research, the root of EDU’s recent share price weakness stems from recent concerns that the Chinese government might be looking to change the structure of the country’s education landscape.

China's population growth has decelerated over the decades, fueling fears that the economy will be dragged down as a result of an aging population. The Chinese government has taken several different steps to try to address this issue, including increasing its childbirth cap and introducing more affordable nursery services.

Alongside these measures, the government has also looked to education market regulation in their efforts to address China’s population deceleration.

For context, Chinese society is highly education-focused, and most families invest a significant amount of money into ensuring their children are prepared to succeed in China’s all-important college entrance exam (the “gaokao”).

The stress and cost of preparing for these exams have led some regulators to believe that they may be acting as a hindrance towards the new generations’ willingness to have more children.

Accordingly, China's government has recently imposed regulations on the AST industry, hoping it would help incentivize more population growth. To date, some of these have included:

Counterintuitively, these confirmed regulations may actually benefit industry leaders like EDU, as they impair the operations of smaller firms, allowing larger, more capitalized players like EDU to gain market share.

We believe the consolidation of power towards fewer AST players is also viewed as favorable from a regulatory perspective, as it should make it easier for the government to regulate the industry.

However, in recent months, rumors have circulated that China is poised to unveil an even tougher-than-anticipated crackdown on the AST industry, which has contracted multiples across China’s education sector.

So what happened recently?

It’s a lot to digest, but the stock has effectively bounced up and down as negative rumors traded shots with positive announcements from officials and non-anonymous sources. To our surprise, these official and state-backed announcements have had far less impact on the stock than the unsubstantiated speculation of the rumor mill.

What’s our take on all of this?

At current valuations, we believe the market is pricing in a severe downside scenario for EDU that is far more likely to not materialize than to materialize.

For reference, we believe at present valuations, the market is implicitly pricing in all of the following:

By contrast, we believe a far more measured regulatory outcome is most likely. Even assuming a fairly punitive outcome (a one day cut in K-9 weekend classes, a ~25% slowdown in capacity expansion growth, and low-single-digit headwind to price increases, which would effectively cut FY23e revenues by ~20%) would result in a valuation upwards of 23%+ off of today’s levels.

We don’t consider the Reuters rumors very credible in their characterization of the anticipated regulatory action. We’ve fact-checked prior exclusive stories of the Reuters journalist that reported the stories related to Chinese regulatory action, and found that her exclusives have not necessarily been a reliable source in predicting future events (see exhibit A below). 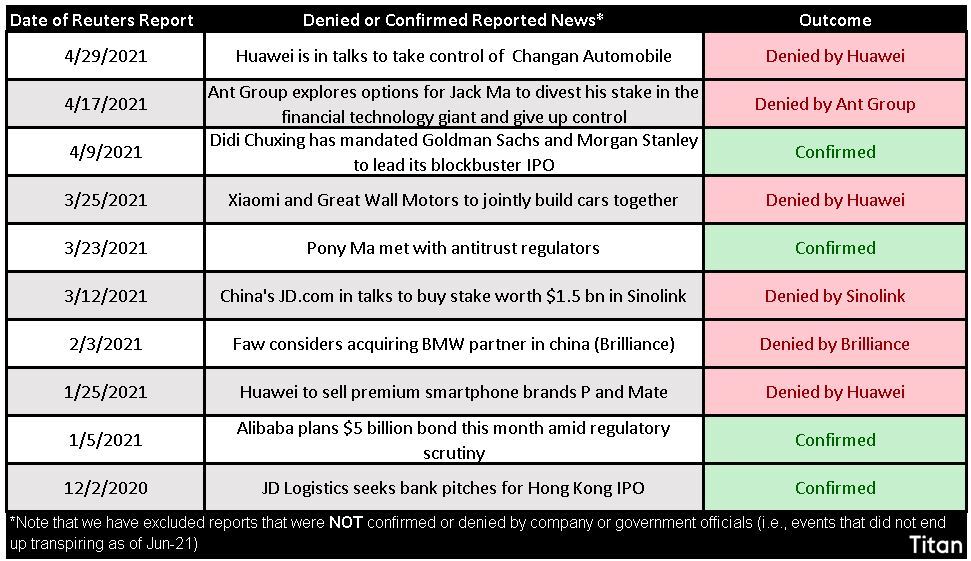 By contrast, all official comments on the rumors (including from state-backed media agencies) have suggested lighter-than-rumored regulatory action. Yet those official developments have been met by comparatively weaker stock rebounds than the anonymous speculation that sent prices down initially.

For example, Banyetan, a state-owned magazine run by Xinhua News Agency, criticized the notion of an outright ban and even suggested that they were aware of and unhappy with the impact recent rumors have had on equity markets, the latter of which we view as a very unusual but very welcome indicator that regulators are factoring in industry-side implications in their decision making process.

We covered Banyetan’s Wechat post in detail in our prior research, but in short the language from this post directly suggested three things:

Additionally, EDU refuted recent rumors of an internal company discussion of there being no classes on weekends and holidays beginning 2022.

Finally, stepping back from the rumor mill, we believe that there are multiple long-term, bigger-picture dynamics on both the regulatory and demand side that could drive a lighter-than-anticipated regulatory outcome.

Our research indicates demand will continue to remain high among parents in the coming years. A weekend and holiday ban would cause parents to seek out tutoring services from non-accredited sources (much like what followed a similar effort to regulate tutoring markets in South Korea in the early 80s). This would go against the government’s stated goal of ensuring a regulated “high-standard” education system across AST programs.

Lastly, it’s important to keep in mind that the Chinese government has many competing considerations at hand alongside this potential regulatory action: they must balance the need for population growth measures with the global competitiveness of their Gen-Z and Gen Alpha population, and the job stability of the 400k+ institutions in China’s AST industry. These are significant considerations we believe the government will weigh with seriousness.

Holding EDU through the regulatory catalyst

While the eventual regulatory outcome could take any number of shapes, we believe on a probability-adjusted basis that the fair value for EDU is meaningfully above where the stock is trading today.

The above summarizes why we will be holding EDU through the upcoming regulatory catalyst. Again, while anything is possible, we believe the market is compensating shareholders generously at these levels based on our assessment of the event path that led up to today, and what it suggests about the forward event path.

Our investment team will be monitoring the upcoming developments carefully, and we'll be reviewing and updating our assessment of the stock immediately following the regulatory event. Stay tuned for more.