On Wednesday morning, Netflix stock dropped -7% after reporting Q1 subscriber growth numbers that came in significantly below forecasts (4M vs. an estimated 6M).

This is both because of that metric's position at the top of Netflix's growth algorithm, as well as the historical dearth of other meaningful cash flow and profit metrics on which to evaluate Netflix's performance.

While some analysts will be quick to interpret the subscriber miss primarily as a signpost of the end of the pandemic period growth, we believe it's worth noting that it's likely just as much a reflection of the simple difficulty of forecasting subscriber metrics over a historically unique period.

In fact, over the past 5 pandemic quarters, Netflix has consistently over and undershot all of its subscriber forecasts, with an average deviation of +2M (and a range of deviations spanning from -2M to +9M).

Netting all of that out, from the beginning of 2020 through next quarter's forecasts, Netflix is on track to surpass its total subscriber projections by +8M on net. 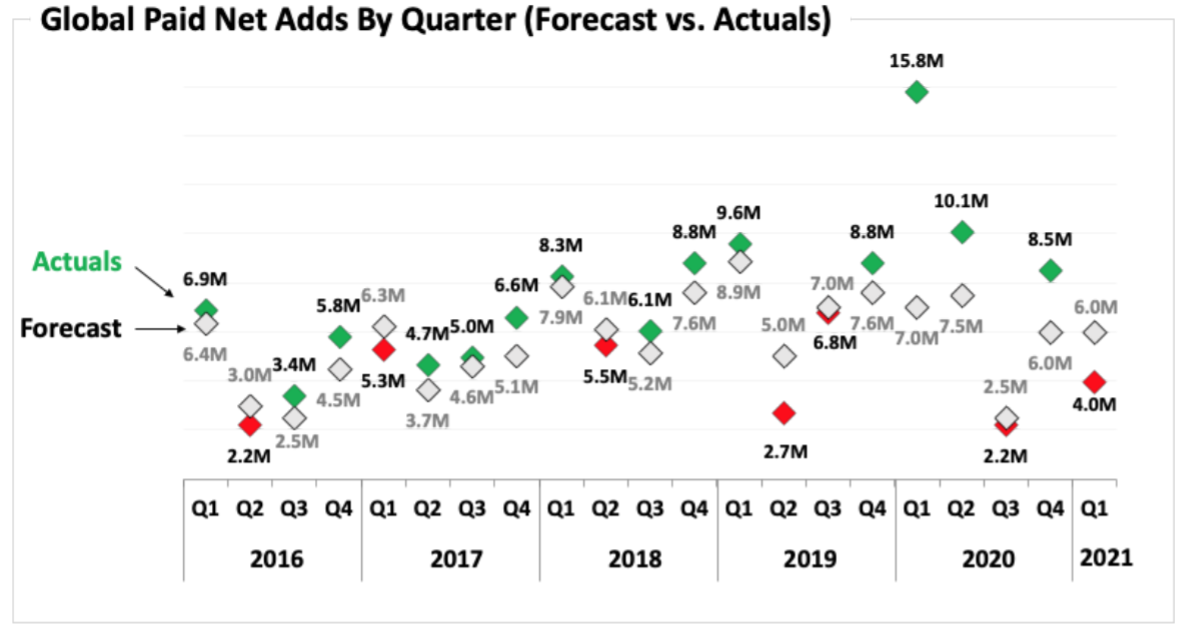 We expect quarterly subscriber metrics will continue to be volatile over the coming quarters with pullforwards giving way to givebacks that on net we expect will land on the positive side for Netflix (as the data currently suggests).

But in the bigger picture, what we believe is more important is that Netflix's user experience flywheel simply remains strong and turning. This is something we were pleased to see indicated by the other key metrics Netflix reported on.

We believe that is a remarkable feat, especially considering those outcomes were achieved despite a slowdown in content spending, which in our view is indicative of the durability and long tail nature of Netflix's content investments.

Netflix is maintaining its guidance for hitting cash flow breakeven this year, and in Q1 posted free cash flows that more than 3x'd analyst estimates.

While this was of course partially a result of the lower content spending environment (which will re-accelerate in the back half of this year), we believe those results are a powerful indication of what Netflix's end state economics could look like.

We'll continue to closely monitor Netflix's subscriber growth progression as it navigates the transition into an increasingly re-opened world.

In the meantime, we're pleased to see management is similarly prepared to capitalize on any remaining air pockets afforded to it by the market's focus on quarterly net adds with its newly authorized $5 billion share buyback authorization.