Amazon is hosting its Prime Day shopping event on July 15-16. Competing retailers are already prepping for battle. Here's our take.

Amazon is hosting its Prime Day shopping event across two days this year, July 15 and 16. You'll see over 1M deals, including price discounts on televisions, Amazon devices, and a lot more.

With more than 100 million Prime members, Prime Day has become a major annual shopping event. It's no surprise that competing retailers are looking to take advantage of the Black Friday-like frenzy.

For example, eBay will launch a "Crash Sale" (throwing shade at Amazon's site crash last year) on July 15. Target is launching its "Target Deal Days" on July 15-16, highlighting that the sale doesn't require a membership.

We actually think that competing against Amazon Prime on Prime Day without a strong membership program is a losing battle, as we explain below.

Over 50% of U.S. households subscribe to the all-you-can-eat membership program which includes free 1-2 day shipping and loads of other perks. It's literally a household name.

Prime allows Amazon to offer steeper discounts and more compelling value to consumers than pretty much any competitor can offer.

As Amazon grows, its ability to offer steeper discounts gets even bigger ("economies of scale").

Why? Because it's a subscription business model with high retention, which means predictable, recurring revenue. That means very high "lifetime value" (LTV) -- the value Amazon will get from a customer for the lifetime that they subscribe to Prime.

One Amazon analyst penciled out the Prime LTV as follows (full link here): 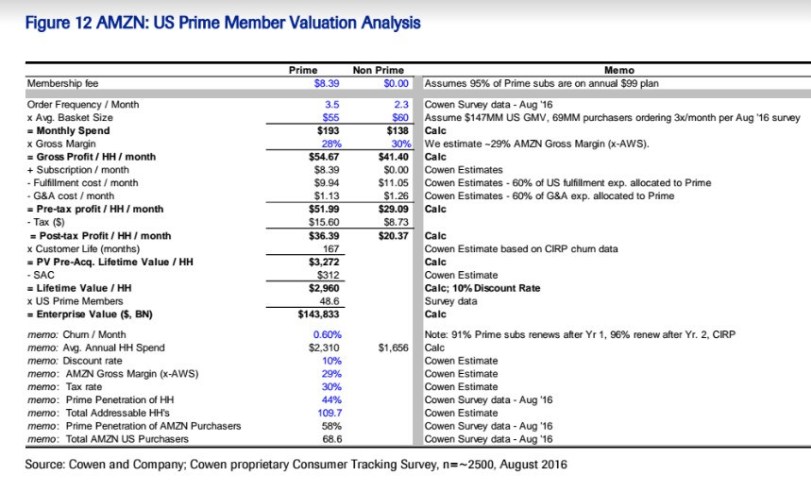 This LTV figure has likely grown substantially since then. Over the past three years, the product selection on Amazon.com has grown, so customers are more likely to find what they want and stay Prime members for longer. Also, shipping times have fallen from 2-day to 1-day on many items, increasing convenience and probably retention too.

But let's assume it's still $3,000 for conservatism. This fat LTV gives Amazon a huge cushion vs. other retailers without membership programs. It means Amazon can afford to push the pricing envelope and offer deeper discounts to Prime members on Prime day.

Why? It can make up the foregone profits from any huge Prime Day discounts over the many years it will keep a Prime customer. Not to mention the ability to upsell and cross-sell other services like Amazon Fresh.

Takeaway: The Everything Store is Still Unmatched##

Amazon Prime's unmatched LTV creates a conundrum for all retailers -- especially those without membership programs.

Brands will do their best to host sales of their own in anticipation of Prime Day. It's basically their only option, and it's not a bad idea. About 72% of shoppers will go beyond Amazon to comparison shop, according to a Adlucent survey, and some are bound to make a few purchases on eBay, Target, etc.

But in the grand scheme of things, we think most consumers will still close the deal at the Everything Store.